Applications are now closed. The next application period will open in 2021. 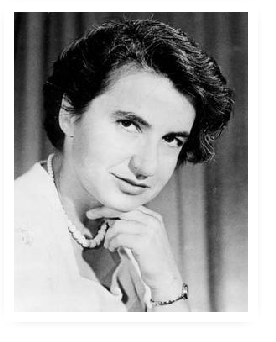 In recognition of the groundbreaking contributions of Rosalind Franklin, the Rosalind Franklin Young Investigator Award for research in genetics is intended to inspire and support new generations of women in our field. The awards honor women in the first one to three years of an independent faculty-level position whose work displays originality and scientific creativity, leading to new discoveries.

The Rosalind Franklin Young Investigator Award is funded by The Gruber Foundation, and is administered by the Genetics Society of America. Award winners are chosen by a jury of senior geneticists and previous awardees.

Women may nominate themselves or be nominated by a colleague, mentor, or department.

When the nomination period is open, there will be a link to the nomination form at the top of this page. Please use this form to submit all nomination materials; printed copies of any of these materials will not be accepted.

The nominator, whether that is the woman herself or a colleague, mentor, or department, must include two letters of recommendation on the nominee’s behalf. These letters should be written by people who are familiar with the nominee’s work.

Recommenders should describe what distinguishes the nominee as an individual scientist, as opposed to describing her importance on a team of scientists. In addition, the recommender should describe the nominee’s scientific creativity and leadership skills within the lab.

When all nomination materials have been received, a jury of senior geneticists and previous awardees will review the nominations and select two recipients.

Nominees may come from anywhere in the world; US citizenship is not required. The nominee should be a woman in the first one to three years of an independent faculty-level position, and her work must display originality and scientific creativity. The nominee should be directing her own laboratory as an independent investigator and should be listed as the Principal Investigator for research being published from her laboratory.

Reviewers consider the following criteria when selecting a recipient:

The next application period will open in 2021.

Do I have to include a budget with the nomination?

No. Although a stipulation of the Rosalind Franklin Young Investigator Award is that it cannot be used toward salary for the recipients, it is considered an individual prize, rather than an institutional research grant. Therefore, you do not need to include a budget with the nomination.

Should I include figures in the explanation of the nominee’s current research?

Space is limited to 700 words, and figures may take up a sizeable amount of this space. Unless the figure will clarify the research without adding significantly to the word count, we recommend that you do not include figures.

Should I include a reference list in the research description?

No. Because space is limited, we recommend that you do not include a list of references with the description of research.

Do the references need to be Board certified in order to give the nominee a recommendation?

No. References are not required to be Board certified in genetics in order to write a recommendation. Research in genetics is sufficient.

You ask for two recommendation letters. I would like to submit a third. May I?

No. There is no provision for including more than two letters of recommendation.

Is there an age limitation for applicants?

Although there is no age limit for applicants, the award is targeted at women who are in the beginning stages of an independent research career. The objective is to support women who will be starting or have just started their own independent lab and will be the principal investigator on the research from that lab. Most likely, these will be women who have recently finished their postdoctoral research and are moving forward in their careers.

Do you “stop the clock” for maternity leave?

Yes. If a nominee has passed the three-year deadline because she has taken time off for maternity leave within the first three years of an independent position, we will take that into account and consider her eligible for the award.

The nominee has just finished her postdoctoral research and has not yet found a position at a research institution. Is she eligible for the award?

The award is designed for a researcher who is already in or about to be in an independent research position. If a woman does not yet know where she will be located, she is not eligible for the award.

The nominee has just finished her postdoctoral research and has just accepted a position at a research institution as of January. Is she eligible for the award?

Yes. If a nominee already has accepted an offer and will begin an independent research lab at any point in time from before the award is officially distributed—then she is eligible for the award.

The nominee has not had a postdoctoral position; she went straight from her PhD to an assistant research professor position. From there she went to a position where she now directs her own lab. Is she eligible for the award?

As long as she is within the first three years of an independent position, she is eligible. If she will be entering her fourth year before the award is officially distributed, she is not eligible for the award. The purpose of this award is to provide seed money to help a female investigator establish independent research in her own lab.

Does the nominee need to be Board certified in genetics in order to be eligible?

No. Board certification in genetics is not a requirement for nomination.

The nominee is an independent researcher within the first three years of directing her own lab, but she is not on the tenure track. Is she eligible for the award?

Yes. As long as she is within the first three years of her faculty appointment and she is doing independent research, she is eligible for the award, even if she is not on a tenure track.

Are there any restrictions on how recipients may use the funds?

Recipients may only use the funds for expenses related to their research program. They may not use the funds to support their salary or to support institutional overhead or indirect costs. The research that is supported by these funds must meet all applicable legal, ethical, and regulatory standards.

Stay informed with our newsletter.